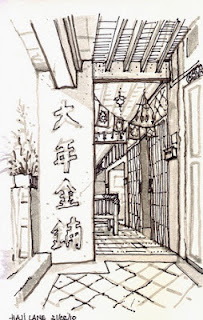 I am standing on a footpath beside a tall tour bus near the Golden Mile Food Centre, that place that sells military gear. I board the bus and finds a seat near the back. I look at the seats in front. They are beige and trimmed in yellow. I smile, surprised that such a color scheme works. But mostly, I find myself feeling vulnerable. Stabbed in the back?

I am in an alley, typical of those found in Geylang. I am standing just inside what seems to be the backdoor of a restaurant. Everything is in slow motion. A rather portly guy in one of those ah pek (old man) cotton white shirts, probably the cook, walks in brushing past me. He mutters something. But as it is all in slow-mo, I cannot make out what he is saying. A helper then brushes past me with an aluminium basin. I see that flash of metal clearly.

Wooden tables and chairs are placed in the alley, food is served. The same men now sit and eat, chopsticks moving from dish to mouth, rice to mouth. They talk between mouthfuls. Not far are hung bird cages.

I am in a small field looking at a wall and through a doorway, one of those old ones with a rounded top and wooden door that opens to the back alley. I can still see the men eating.

I seem to be in a compound  of a school. By its architecture, it looks like a Chinese school, the sort with simple lines. The ground floor is a void space filled with tables and benches. A canteen? But the 'stalls' are closed and shuttered. The shutters are the old accordion type, metal and painted silver. From a distance I can see that the shutters are also painted with the Taoist deity images of the God of Heaven and Heaven's Emperor - figures normally found on joss paper and hell money.

I turn and see the other side of the field. It is not smooth. Earth has been churned up, turning the landscape into a series of cracks and gulleys. One false step and an ankle would sprain. It all goes down a mezzanine slope. Two kids, girls, are playing catching on a bald flat patch. A group is approaching; they had climbed through a sorry gap in the chain-link fence that bounds the field. They need help climbing up that broken slope. The group consists of ang mo tourists. The women are mature and all dressed in 50s fashion, including wearing those pointed spectacles. They ask for directions and I tell them.

I am now walking along a shophouse five-foot way. Shopnames in red relief Chinese characters on cream-colored pillars flash past. The place looks old and dated. Light is low; it must be dusk. Again, everything is in slow-mo. I look up. Ahead swing some bird cages. Bird noise mixed with traffic noise into a sort of busy emotion. It's soundless though. With that I wake.
Posted by TC Lai at 08:20