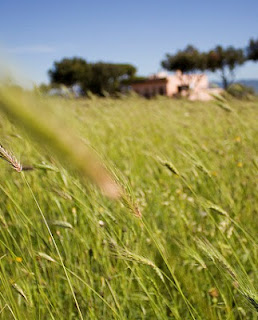 I am inside the bedroom of a Tuscany country-house of sorts. You know, square-plinthed pillars with dangly vines and deep grained darkwood beams. A woman my wife whom I sense to be Jo, a gf I'd once been intimate with and loved, and I are about to make love. The bed is large, covered with white on country-green sheets and comforters. We're in a bit of a rush, as if stealing time for a passionate moment. She's in tight pants and sweat shirt kneeling over me. I am half naked in the covers, waiting.

A knock on the door. Jo reacts. In that instant, a switch. She becomes Julia Dreyfus, that often gobsmacked girl from Seinfeld. Not again! was the expression on her face as she rolls off the bed. An air of exasperation.  Jo and Julia have the same body type, the same kind of niceness and acquiescence. Girls who knew what they liked but were not sure how to get it - why I think my Unconscious did the body switch.

At the door is an old woman. White haired, wizened but not decrepit. She looks like Lagarde the head of the IMF but much older. We straightened ourselves as she walked in, uttering her bonjours (are we in France then?) and asking when we are going to pick up her stuff from the market.

The scene changes. I am in a field by a dirt road waiting for Jo/Julia to turn up. She does.

She's driving a strange cart. It's on a 3x4 feet board and on it a closed-up sewing machine; the Singer kind. She's sitting behind and steering it like a tractor, arms stretched out. There's a big smile on her face. I don't see wheels. The board/craft moves, bending the tall grass underneath.

Behind her a neighbour draws up. She's driving a somewhat similar contraption. But instead of a sewing machine, she's driving a shortened metal post-bed with bed springs. They dangle and jostle as she swerves away.

In another scene, I see the same neighbour in her patio, one that is shaded by vines and leaves. She's laying out some Summer treats on her thick and rustic wooden garden table. She making small talk but I cannot make out what she says.

The scene changes back to the house. The old woman (mother-in-law?) is very thankful as she receives her produce. We leave her and reenter our bedroom. We flop back onto that big country bed, me on my back holding Jo/Julia as she again kneels over me. I hold her waist and am now sure she is Jo. She lowers her lips as we seem to begin to make love. But I wake before that happens.

The next subsequent dream (after a short interrupted sleep):

I am cycling quite fast down a dark path. It is only illuminated by my bicycle light. With each push of the pedal, my light eats up the darkness in front. The narrow tarmac path rushes up to greet me to disappear underneath my pedalling feet. My bike light reflects off the zinc drain gratings that run alongside.

I seem to be riding along an embankment of some sort; a concrete slope is on my right. Images of a small dog greets me. Its disembodied head mouthing a bark. Next, a bigger dog appears, doing the same thing.
I am not perturbed as I feel disconnected by their silent animations. So what? Barking dogs don't bite; mouthing ones even less so.

I keep riding and my dream slowly dissolves into the distant darkness.
Posted by TC Lai at 22:19