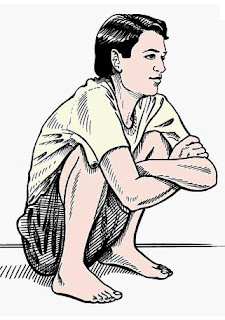 I am at the home of Wendy, a cute 90s want-it-all sort of chick, - you know, the sort who speaks well, dresses well, has a career and is forever looking for that Mr Right? Well, in this dream, she and a friend are getting ready to take part in some sort of outdoor photography contest (felt like the sort of photomarathon Canon would organise) and are getting their gear together. She is rummaging in her room looking for something. I seem to have stayed there overnight, judging from my groggy and maybe even inebriated state. I seldom drink, so maybe I just had a late night. Did we do something naughty together?

I pick up certain things and head for the toilet at the rear of the house. It looks like an old one with green painted window sills and horizontal bars for grills. A guy in singlet and towel emerges and heads to his own room there. A pile of something green lies next to the squat toilet; it looks like vegetables. Was the guy washing veggies right by a squat toilet? I find that incredible. Getting closer, I discover it's just a bunch of clothes. White clothes with a patch of bright green. Is there a significance?

The guy re-emerges. He is fair, has nice cheek bones and neatly cut black hair. He reminds of some Hong Kong star from the 60s. He asks me if I was interested in Wendy. I don't answer him at first not sure why he is asking me that question. Wendy and I have always been platonic in our relationship. And I'm not the kind of guy who sleeps with women I hardly know.

The guy is suspicious and annoyed that I did not answer him. Just then, Chan, an artist friend, appears. He wants me to help him with an art project. Chan and I have done a moving head sculpture together before - he the art, me the electronics. Well, with the both of us, it doesn't really matter; we could easily switch roles. Chan seems to be working on an electronic mixed-media piece. I recall thinking how timely, what with so many of us these days staring at either smart phone screens or tablet ones; even the large screens of LED TVs. And super large displays are now the norm in shopping centres throughout the world's tourist belts.

Wendy returns and tells me that she has found what she has been looking for. A camera tripod kept in a white bag. She asks if I would be back for dinner. I say yes, but she doesn't commit. She grabs her tripod and leaves. A female companion follows. She looks kind of butch, and I wonder about their relationship.