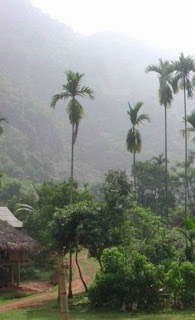 I woke up this morning redreaming an old dream I had four years ago. But because it's a time traveller's journey, the ending changed a little. Like in the Inception movie, a revisit to a place can sometimes cause small changes to familiar details.

The place I am 'sent' to is a rural village of wood and stone structures. It is situated on a mountain top. I begin by knocking on a pair of big wooden doors. A bent old man in a white dhoti and headband (Indian?) on the other side gets up to answer. He slides a wood beam away to open the doors. It's the same mechanism found on ancient Chinese wooden doors.

I walk in and continue to cross the room. I see wooden pillars of a strange grain quite similar to old pine. The floor is cement and familiar; it is worn smooth and looks cool. I turn to look back through the doorway from which I had come and can clearly see a green mountain range riding on the horizon. The range slopes down to a valley of terrace fields in various shades of green, red and yellow. It reminds me of a place I have seen in Bali.

In a few paces, I am out of the hall and walking along a sandy dirt track into the village. On the left is a row of stalls and shops all made of bamboo and mat. I see ethnic goods on display. Ahead, I could see a temple-like wall structure made of what I surmised correctly to be raw coconut shells. It has that same milk-beige colour. Must be new, I remember thinking. Around it are open grass spaces and coconut trees.

I then run ahead in happy anticipation. Sure enough, a little further up the road is the more impressive temple made out of the same but seasoned material and darker. I am happy to see it again, the same sort of happiness that comes from recognizing a familiar landmark after many years of absence. It looks like an Indian temple but with short two Moorish towers. It think I have seen them on a computer disc cover before.

For some reason, I do not venture further forward but turn back. There's a wooden portal on my right, just after the temple. It's a step-over entrance to a Chinese village. The same scene replays from my first visit many years ago: A dirt track leading into a village centre that is a hub of activity. A wayang stage. A row of mothers in samfoo with their toddler kids in tow queuing up for something. I look at the last mom and and find her familiar. She is pretty and acknowledges me with a smile. She seems to say, "Welcome back."

I get the feeling the mothers are lining up their kids for vaccination shots like before.

I do not enter the village but continue on. I next turn left and come upon a family home. It's not rustic like the rest but feels more like a flat. The flat is fronted by a pair of cream-colored doors that are metal frames and vinyl and very 50s in design.  An aged couple with greying white hair welcomes me. Their daughter, young and about my age, is in there too and they introduce me to her. She looks a little abashed, a mixture of surprise and coyness.

We sit down for a meal and talk. The topic seems to revolve around voting and the coming election. We get all animated. I look at their faces closely and try to form an opinion. They are nice folks, these.

Soon it is time to leave. The daughter is going to bring me to a terminus building to take a coach bus. We walk past a row of simple concrete buildings the likes of which I could find in less developed areas. They seem to be selling a all manners of stuff including phone cards. The terminus building is a Chinese-style bungalow with wide staircases and fat balustrades. It somehow reminds me of the interior of Singapore's National Museum.

I descend one such staircase and find myself at the rear of the building in a sandy compound. It is fenced in by a low concrete wall the shade of which retreating grass patches have found refuge. The wall has an opening but is not gated. I can see a coach bus waiting for me right across the kampung road. Its engine is running and grayish smoke is puffing out from its rear exhaust.

The bus is full. The daughter and I say goodbye. She cries, sad at my departure. There is a longing in both our hearts. I don't want to leave but know my time as a Traveller is up. I tell myself that I cannot trip up the universe's space-time continuum, that I must return, or so that is how I feel. For some reason, I do not nor can share this with her.

In my last dream, I did get on the bus and leave, heart heavy. This time, however, a friend has volunteered to take my place. Not just this friend but a group of them, actually. As the bus leaves, they bunch up behind to wave me a final good luck in a rather enthusiastic fashion. I wave back at them grateful for their intervention.

As the bus disappears leaving behind a cloud of dust, I am left standing in the dirt track. I turn to look back at my girlfriend who has gotten up from her bench seat, just outside the compound. She looks happy, demure in her samfoo and holding a handkerchief. I am happy too that this time, I am able to stay behind. I smile a broad smile and walk up to her. We hold each other in a long embrace.
Posted by TC Lai at 00:11

Email ThisBlogThis!Share to TwitterShare to FacebookShare to Pinterest
Labels: a Chinese village, a love., Mountain village, temple made of coconuts, time travel