Of Tennis, Toys and An Old Classmate 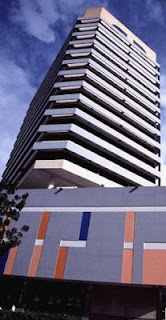 This dream I dreamt during a second phase of sleep, which is interesting because it was a short nap.

I am asked to play tennis by this tall chap who appears to be named Matt. He also seems to be a student of a design school at which I am teaching. We are in a tennis court and I am telling him, in response to a question, that tennis isn't a difficult game. "You just have to hold your racquet firm and let the ball bounce off it," I tell him. (Note to reader: I am actually a very good tennis player in waking life.)

We play and stroke for a while. Eventually time is up and we leave. But we want to play some more and walk around to look for a free court. We move through a dark gymnasium and lift a large canvas shade at the end. It reveals strong sunlight and young folks busy playing tennis on the other side.

Most of them are girls in colorful tees and shorts bobbing and whacking balls left, right and centre. No one seems to be in tennis white.

Each court is fenced in and as we stroll by looking through the metallic fence links, the girls look back. They are neither hostile nor friendly. Just curious.

Matt and I settle our things on a concrete bench (one of those old-style Chinese ones with a decorated curved back found in Chinatown or outside some hui guan (clan association)). The court is clay-red and green outside the tramlines and the fence at the back is covered with an aged canvas to prevent balls from squeezing through the chain-links.

We wonder how long we could play before we get chased off, seeing that we have not paid for the use of the court. Again we stroke the ball awhile and I noticed that we are at the last court of the tennis centre. Beside it is a playground with an obvious metal slide. Beyond this, the beach. I seem to have seen this scene before. But the game involved then was golf.

The next scene moves indoors and I am in an empty activity centre, the kind found in most community colleges in the U.S., the sort with glass paneled doors and colored metal frames. I am inside a room that has three trapezoid-shaped low tables - the conjoined sort ideal for group work. The tables are red and yellow and on them are toys in various stages of design and assemblage.

I ask a student there where Matt is. He says he has gone out to get something. I exit and enter into a darkened hall. At the end are some unused tables and chairs stacked against a wall. I continue to look for Matt.

Moving away from tennis, I am now in a block of old flats looking for my ex-primary school classmate Rambli. I come across two flats, each with their doors opened. Large families of Malay folks are gathered around tables enjoying good food. I pass one family and they ask if I am looking for Rambli. I say yes and they point me to the flat next door. A plumpish lady there excuses herself from a large feasting group of people and welcomes me. "Ah, Rambli's friend," she says. She adds that Rambli is not there and then ushers me to an exit on the left. It's a darkwood verandah eaved in the traditional Malay style. I walk down the few steps leading out.

I find myself standing in a sandy patch that's part road and part unused ground. In front of me is a towering indoor car park. The building reminds me of Sim Lim Tower, the same 12-15 stories high. According to the Malay lady, Rambli is in a village down the road behind this imposing building.

I start to walk but is hailed by a lady who is an ex-classmate as well. She asks if I have found Rambli. I say no and go sit with her on her swing. We chat and I remember wondering about that that car park building (which is just in front of us) all the time. That and the sandy patch that would be occasionally stirred by a passing breeze.

After a time, I get up and walk towards Rambli's village. I cross the sandy patch and come to the edge of a metal road. It slopes down and is shaded greatly on both sides by large trees. It looks cool. I move forward and side-step three metal dustbins in the way to begin my journey. It feels like something I will enjoy and relish and not look back.
Posted by TC Lai at 03:00