Salt and an Airship 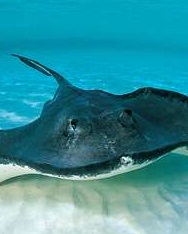 The beach has been broken up into different pieces like a biscuit cracked. At the far end is a restaurant. I am in there eating a steak, and the owner comes and speaks with me. We discuss how the simplest dish can be best tasting. The topic veers to salt as an essential condiment - how it draws flavors out. Or how perhaps we humans are conditioned to like its flavor. Can we live without it? Can there ever be a healthier substitute? I say sure, at the present moment, there's sea salt. It's both natural and healthy.

The owner tells me that Changi used to have a natural salt mine. He brings me out and shows me a spot. It is one side of a hill by the beach at a cul de sac. A slurry of salt still lies there. Goats in strange white fur loiter and graze. Their coat appears to be 'saltified'. Just like how snow changes the look of creatures in winter, this salt has done the same.

I am wary because goats can be aggressive. Just then, one turns and stares. Is it going to charge? The restaurant owner is nowhere to be seen. Oh, right, he's climbed to the top of the hill. He's safe.

I start to think how best to avoid this rattled goat but before I know it, it has started to charge at me.

In normal circumstances, I would pick up a branch and whack the attacking creature. But today, I decide to just treat it like play. Like how a matador might treat his bull. So I wait for it to charge and at the last critical moment, sidestep it to allow it to slip past. Only just. Ole.

The goat rushes by me; it tries to charge again. The same result. In the end, knowing that it cannot win, the goat stops and decides to graze instead. Still, it did not let its eyes wonder and looks at me one last time as if to say "This ain't over yet!" I climb the hill and rejoin the restaurant owner - exhausted but relieved.

An airship is arriving; it's no Hindenburg  No big fans at the sides. Instead, cowled engines like those on jumbo jets can be seen affixed to the sides of a large cabin. The cabin looks sleek and its windows have glass that's been treated to transition with the intensity of sunlight. When the airship passes under a cloud cover, the cabin windows visibly lighten. I can now see inside. A launch party is in progress. Someone who looks like Steve Jobs is hosting the party and holding up an iPhone. The guests inside gather round him to listen as he begins to speak. The iPhone he's holding appears much longer than previous models. It's like a wand. 'Steve Jobs' waves it about and laments, "Apple has lost its magic."

Just then, I hear a loud yawing sound - the same kind that tells me metal has been stressed and stretched. Beyond the airship, in the background, a range of mountains has slid down as if melted. The same phenomena is repeated all round like a domino effect. Haha, I laugh. So iOS6 Apple Maps is accurate after all! The landscape around looks like that Paris scene in Inception where streets have been warped and melded. Only this time, the slopes of mountains have been melted like stripy travertine caramel ice-cream gone soft.

My attention returns to the airship. It looks unlike anything I have seen. For one, it is not WWII bomb shaped; no finny things behind for balance and manoeuvring  Instead, the airship looks exactly like a ray fish, its leading edges rolled and folded in an aerodynamic way.

The restaurant owner, still standing beside me, explains that the airship design is new. Instead of using fans to control altitude, a compressed air ballast is deployed to control buoyancy. It works better this way, he says. There is no need to drop ropes and have workers pull the ship and secure it to a set of mooring towers. In this way, such an airship could travel and park anywhere.

I return to the restaurant with the owner and discuss some more how such an airship could be deployed to explore a place like the planet Mars. Certainly even if the air there is too thin, a self-contained airship with volumetric buoyancy control could launch itself airborne and explore the place even more. No more crawling around at snail's pace like NASA's Curiosity.

An order of food arrives. It is BBQed stingray in sambal belachan. Sweet! I remember thinking before tucking right into a bowl of white rice in hand.
Posted by TC Lai at 18:25