An Old Friend in an Old Town 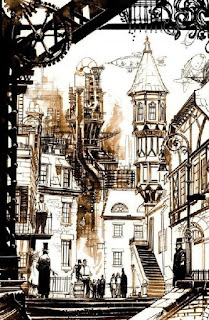 I was surprised by this dream. First of all it's long. It also has some elements of an old dream involving an old friend I have not met for a long time. I'm surprised I recalled and dreamt about it.

The dream is unusual in another way: it is multifaceted. To understand, let's begin.

The dream starts with me in a semi-detached bungalow. It appears to be my mom's home (in real life she stays in a small, cozy flat). We are all getting ready to leave. My mom has been invited to an old friend's place and we are to travel there in two separate cars. I leave and brush past the MPV parked in family driveway. On its back D column, I could see that the surface of the van is made of dark green jade. The jade is streaked in blackish cloud lines commonly found in expensive jade. The cloud patterns are regular and paisley minuscule in shape.

The other car parked outside by the kerb is a wide saloon reminiscent of something Chrysler might have make in the early-70s/late-60s.

My ex-GF is waiting there and so is tall, lanky guy with 70s hair, pants and shirt. He reminds me of some party guy from a band who is out to annoy folks because, well, he could.

I pile into this second car with them. The lanky guy decides (purposely) to get in-between me and my Ex in the backseat. Throughout the whole journey, with every roll of the car, he would pretend to lean exaggeratedly on her making her feel rather violated. She would then hug her handbag tighter and squirm further deeper in the corner. Finally, after the umpteenth time, I decide to get in between them. My Ex is relieved and rests her head on my shoulder. The tall, lanky guy makes no fuss and whistles away as if nothing has happened.

I notice my girlfriend's ear and remember the countless times I've whispered sweet nothings into it, not to mention the affectionate nibbles I've bestowed upon it. The scenes outside the window roll by, seemingly wistful.

I had dated this Ex because we shared an interest in photography (she introduced me to Henri-Cartier Bresson) and were from the same dialect group, Cantonese. After we broke up, I've often wondered how she got on. We've never met again.

After a while, we arrive at my mom's old friend's place. It is in the middle of an old street (Chinatown?) which is itself in the middle of a warren of houses that looks rather Dickensian in structure and haphazardness. The facade of this old friend's home is paneled with curvish wood the color of teak but lacquered to give it sheen. Some of the other nearby buildings have beams that are painted black.

The curved panel wood reminds me of those half logs popular in Chinese carpentry. You know, those that follow the semi-circle geometry common in, say, Chinese coffins. Used on buildings, they look robust and strong.

I size up the facade but has no idea as to how big the home is or how wide. Buildings in this particular warren seems to mesh into one beast with no apparent beginning or end.

Inside, the home is surprisingly not unlike any semi-detached bungalow with its tiled floors, pastel wall paint, semi-French windows, guest hall, dining room, etc. It even has a round pedestal Chinese vase standing in one corner offering up a spread of tall, pink spring blossoms.

I look out of one of these windows and expect to see a garden. Instead, the whole ground has been turned into a wading fountain calf-deep in water filled with carp, lotus, and lily pads. In the middle and commanding much space is a black marble slab carved and shaped into the Chinese word "sow" for longevity. It lies horizontal and faces the sky. Water flows over it and off its edges and into the pool below.

I've been in this home for a while and get bored. I decide to leave to explore the neighborhood and see what kind of shops there might be out there.

I look around for an exit and see a flat panel door by the indoor staircase. I intuitively think it will lead to the outside. It does.

**Into the Rabbit Hole

Ok, it is not exactly Alice in Wonderland but as I stepped through the small panel door that's half my height, I stumble into a corridor that's more like a crawlspace. Perhaps it is a chute that exists between buildings. It is made of plywood and box-like and one could sit upright in it.

I see a similar panel opening opposite and so crawl into it. Didn't look like I have much choice.

Because of the awkward height of this panel door, I had some difficulty extricating my leg and so stumble my way in. I fall back and immediately, someone pins me to the ground. It is my old friend, Loon.

He has the same shaggy hair and those "far-away" eyes.

He doesn't speak. In my dream he looks at me as if staring  up close into a camera. His eyes are moist as if remembering something painful. It is pleading too, asking if I feel the same pain. I watch, transfixed.

Then his lips purse up an earring. It is one of those small ones that curve round the lobe. It is gemstoned in pastel colors. Lilac and pink. Was it from a past love that he is recalling now?

In a moment, the other half of the same earring, as if to answer my question.

After a while he retreats and I raise myself up. Resting on one elbow, I chat with him.

Loon and I had done projects before. Once, it was a rotating head with arrows of mental illness types stucked into it. It was for a national exhibition to promote mental health. Another time, it was woodworking, costume making and game design for a live role-playing game. We were both into sci-fi then.

Loon's room is quite the same as the corridor. Plywood and box-like and he has to stoop his head to move about. I think that's the image I remember Loon of most. Stooped, as if having worked long hours, but his eyes betray a brain that's constantly thinking, creating. His eyes were kind though.

After some chitchat, Loon points me to a shop whom he is working with. Loon is an illustrator and stage designer. He did Singapore's first digital comics panel for a local Sunday paper.

Where is the shop? I ask.

We both exit his capsule room and end up in a shop that reminds me of a perfume showroom, you know, the kind that you find at shopping malls? The ones with counters of particular brands of make-up and parfum?

I chat with the girls there and found them to be a conviable bunch. They are young and eager to share. I wanted to return the hospitality by showing them a funny video I saw on Youtube.  It was a ROFL kind of video from a Learn Japanese Through Exercise class.

However, no matter which computer or laptop we used, it was not possible to get online.

In fact, some of the keyboards they showed me looked decidedly like Victorian steam-punk gadgets. Or some would be made of colorful plastics. But still no access to Google and Youtube. In fact, some of the gagdets were not unlike calculators or cash registers that are part of their countertops.

The whole place has a candy Japanese "kawaii" feel about it. Not too garish, but fun and comfortable with make-up lights et al.

I then want to use my phone to access the internet and realise that I've left it at my mom's friend place.

I meet the boss, who is a kindly lady dressed in a pink jacket blouse and black skirt. The fashion looks decidedly Korean.

Seeing how handy I was with the gadgets and stuff, the lady offers me a job. I feel it has more to do with the Communications aspect of my work experience. She confides that she does need someone to look after the marketing of her products.

At that, I wonder about the whole place and what it is like. Well, a marketer does need to know his area and base of ops!

Next, I leave the shop and find myself outside where we had first arrived earlier. I am now standing on a cobbled street and looking up at a house with black painted wooden beams and a room that juts out....the kind that reminds one of Dickensian times.

Am I in old London?

The next scene flits to an afternoon tete-a-tete with another ex-GF. We are sitting round a small red foldable table and having coffee. It reminds of a scene that leads to another dream. But no chance. I wake.