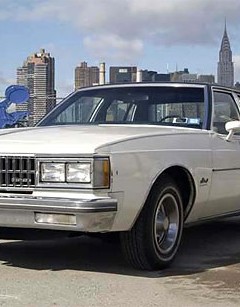 In this dream, I am driving. My car is a large '70s saloon like those found in America. I have a few passengers inside and we are making merry. At a traffic light, we stop. As we were talking, we didn't notice that the car was rolling back. But only just. However, it nudged the car behind.

As it was slight, I didn't think it warranted getting out of the car. However, I noticed through the rear mirror that the other driver was giving livid and getting out of his. So I decided to do the courteous thing and get out as well.

The other driver was really livid and gesticulated loudly at the spot on his car where I had seemingly hit him. I see dents and scratches, as if on a stainless steel surface. It runs the length of his car. Dents like raised ribbons of scars and scratches looking like buffed aluminium. Ok, I get the idea, the side of his car was like a battleground. But I remember thinking, hey I only so slightly bumped you, what has these other scars got to do with me? If anything, it showed that you were the worse driver.

Just then, I realised he was my ex-classmate BH. He's usually very calm and reserved. But now, he is getting all worked up and livid. In fact, in the next moment, he rolled on the floor demanding that I make amends. He rolled back and forth, arms crossed against his chest, throwing his tantrum at the same time. "You were wrong! You should apologise!" I couldn't take it and stuck out a leg to stop him.

I woke up thinking how funny that was, me sticking out a leg and stepping on him to stop him from rolling, like someone stopping a runaway log (small one).

I next drive away into the next town.

Afternote: I try to understand this dream and determine its triggers, but unlike my previous ones, I cannot find any. For the car side scratches, that I get. It resembles the opening sequence of James Bind's 007 Quantum of Solace which was recently shown on prime time TV. Why my usually calm classmate would roll on the floor like that, I haven't a clue. It's not normal even for anybody!