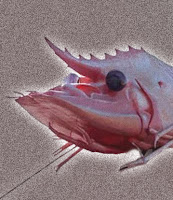 It's funny, don't you think, to remember in a dream something you have caught in another dream and forgotten all about?

I had dreamt of a lobster prawn (which looked incidentally like a giant cooked prawn all pink and whitish, see pix on left) a week ago. Today, I dreamt about opening the same bag (the side pocket of a haversack) and remembering that I had caught it sometime ago. I had forgotten all about it during all this time. I even reprimanded myself about it, and for not having fed it and if it was still alive. It was. And hungry probably, judging by the aggressive way it reacted when I opened the pouch. Who can blame the poor creature!

The reason I remember today is that I dreamt I had caught another giant prawn. This one is dead though. I was putting it in the side pouch when I discovered the another one inside. At the time, I was in a bus driving some school kids to a seaside excursion and had caught the prawn in the sea. I don't know why this one is dead and the other one alive.

So I put the dead prawn in together with the live prawn. Immediately it pulled its dead companion further inside. I was worried that it would cannibalise it. But for some strange reason, hungry as it was, it didn't.

Back home, I decided to put the live prawn in a basin to feed it properly. The basin was blue and plastic, same one as I have in my non-dream home. I then looked for a flat piece of gauze wire to cover over it. I wondered about what I should feed the prawn now crawling in my basin. Could I feed it with small prawns like I did with my dead and gone turtle? Wouldn't that be cannibalism? How about bits of sotong?

The next day, I told the kids in the bus that they could no longer swim in the sea. They did not sound too disappointed when I told them about the giant prawn. A few want to go to my place to look at it. In any case, some of the kids put their diving masks on and stuck their heads out of the moving bus. Their hair flew back as it caught the wind.

To engage them in another matter, I told them to organise themselves into groups of four. This they did, getting up in the bus and exchanging seats. I remember thinking, 'What an obedient bunch!'
Posted by TC Lai at 19:25