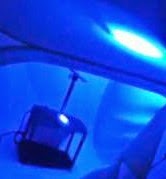 An old dream revisited. Recurring dreams haven't happened to me in a while, so I was rather surprised by this one in the dawn hours of the morning.

The dream starts of with me fixing a small bike light that's a clip-on (belt) the size of a cigarette lighter pouch (i.e. the Dupont GI lighter kind), than a full-sized head lamp. It is quite flat and rectangular and newsy with its blue LED light. I am trying to fit two wires into their respective wire posts (a technical term such things); I am trying to fix it with one hand, the other hand not quite sure why not free.

There are three wire posts and I've gotten one wire in; I'm struggling with the other two and trying to twist them thin to fit, not so easy with just one hand. The blue LED light works but I have to get the other two wires in to have the white light come on.

All this while, I am walking to a gathering area that seems to be a small cultural plaza with a raised modern art area (at where some students are sitting and in discussion). I think a movie of sorts is being screened as well. My god-sister Carmen is there (she's not in the original dream though) and she asks about my well-being. We then chit-chat a bit.

I continue to fiddle with the bike light on my belt.

I sit with my god-sister for a while. The next scene see me getting up and walking the corridor at the edge of the plaza that is leading to a supermarket. It is night and the s-mart is closed. I reach the end and enter what appears to be a small theater. My friend CK is there seated at the back. He gives me his typical smiley hello. He is wearing a yellow headscarf over his bald pate, not something I've seen him with before. It looks like a kind of temple scarf with red Taoist rune letterings.

I sit down and wonder about what's going on on the movie screen.

Again I fidget with the bike light to try to get the wires in.

Watching the movie, I am transported back to my NS days. I see myself in a new green field uniform, of a camouflage pattern I have never seen or worn before. In the old days, we wore the old patchy "camo-pattern" ones, not these new pixelated ones that's common to most modern armies now.

In the next scene, I am climbing down from a tank. Must have been a tank on show as everything looked clean and posey. I am reminded of the night I had spent at the local officer cadet academy grounds in Jurong enjoying the midnight quiet and starry sky, and wondering what I would have become if I had signed-on (i.e. joined professionally) to the army. The academy grounds did once have a display tank there.

In the next scene, I am returned to the plaza and back to wearing the same windbreaker as before. Again I fidget with the bike light to get the wires in. Again, without much success.