On a German Mountain 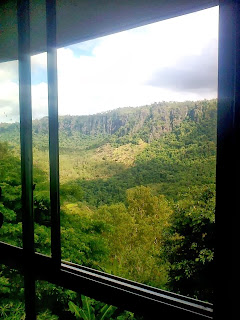 I am on a tour bus going up a mountain. It is autumn with the air slightly cool outside. We alight at a small town whose houses are all of modern design circa the 1970s. They cluster together and are linked by cobbled alleyways.

I walk through one and pass by a white building whose ground floor home is adorned with wide glass panel doors that reminds me both of a Spanish hacienda home and a car garage. The walls are sandblasted and rough to the touch, a wall treatment popular with condos in Sg built in the late 80s.

Into this white building I enter. It is a home.

We are in fact in a small kitchen, an utilitarian one that is so common in UK flats from the 70s. The table is red formica and its edges are trimmed with a strip of aluminum.

We are going to have some kind of German cake with white cream.

I look out of the kitchen window. Forested ridges and valleys lay below. It is a magnificent view.

Outside, there is a commotion. I go out and discover that evening has fallen.

There seems to be a religious festival going on. Opera face masks - both large and regular size - float in the air. People are following them and wondering at their magical presence. I too wonder how they manage to float in the air without seeming to be attached to with strings or other method..

A teenager is seen marshaling the masks forward. He is doing his job and using a handphone at the same time. Typical, I mumble, and go "tsk-tsk" at his split attention.

When we reach the lookout point at the top, a giant moon in the sky greets us there. The moon is huge and covers almost the whole sky. I think Old Man Moon is smiling back at me but only fleetingly. The bright moonlight feels warm and inviting though.

In the crowd, I am with two of my former GFs. One is with her hubby; the other, well, she is her usual quiet, smiley self.

Around a corner, I find myself alone in an alley once more. In the short distance ahead, I can see a watch repair shop. Jurgen Procknow the actor is the watch repairman. He is wearing a watchmaker's magnifying monocle and leather apron. Or is that man Robert De Niro? In any case, I am thinking of a character actor.

I revisit the kitchen a couple of times. The owner couple is there as well as a much younger lady. We seem to be in a discussion over something. Perhaps the development of the mountain region or something else entirely. Not long after, I wake, feeling I've been to the highlands and watched someone carry on a traditional craft.