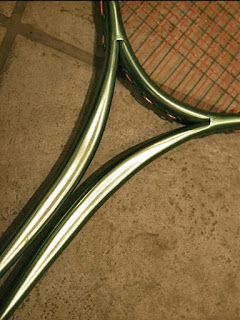 The dream begins at a tennis game. I am a boy and playing against two other schoolboy friends. Strangely, I am not dressed in Mattar Primary School uniform but that of Boys Town English Primary. I am trying to show the boys some tennis moves. One of these is the forehand topspin. I sort of succeed, and realize that I am using an old Yonex aluminium racket, one that is light green and once owned by an elder sister. But although the game starts off well, things slowly take a surreal turn. When I try to execute an overhand lob, the racket turns soft like noodle. I kind of flop the shot through and miss contacting with the ball entirely.

We continue the game awhile, but matters do not improve. I keep missing the ball because the floppy racket.

Next, we are in a large field flying remote control planes. I see my arm doing the same floppy movement. This time, however, in my hand is a remote control. I am waving (or flopping) the control about to direct the plane, like some Wii game controller. The plane flies about in sync with my 'movement commands'. I seem elated by that and run about the field as if I'm flying a kite; the model plane flying in the sky as if connected by an invisible string to my handheld remote. In my mind, I am thinking what a marvelous invention that would be, being able to point the remote at the plane and direct its movements... Including doing a loop-de-loop.

The scene again changes, but the focus is still on a hand. This time, instead of holding something floppy, I am gripping an iron bar that's a handhold inside a robot's fist. I am punching as if it is my boxing glove. I realize I am inside a robot suit and involved in some sort of futuristic robot boxing match. I am boxing and people outside are cheering. This continues for a while and the scene fades, like that of movie ending. The dream then ends. And I am none the wiser.
Posted by TC Lai at 18:26